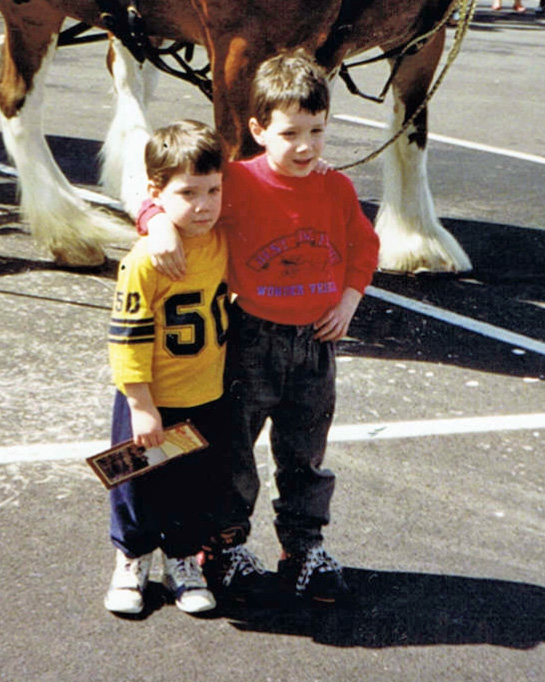 Like so many new parents, Libby and I often felt as if we were just stumbling through the process of raising our boys during their formative years but sometimes we would go against the conventional wisdom such as when our boys reached the age when they were eligible to participate in the ever increasing number of team sports available to young kids.  Our boys actually helped make the decision to opt out of many of the little league baseball, peewee football and soccer leagues, preferring instead to spend time water skiing, fishing, and playing with their cousins during the summers at the retirement lake house in Winchester that we built for my mom and dad.

When my Brother Steven and his wife Susie had their first child there was a shift in our family priorities once again when their daughter Samantha was diagnosed with retinoblastoma (a cancer of the eye) and was immediately sent to St. Jude hospital in Memphis.  Because a lot of the treatments at St. Jude were outpatient, a week of treatments meant a lot of boring time hanging out around the hospital and the Ronald McDonald House, interrupted by an hour or two of scheduled treatments each day in the hospital.

Naturally our family began spending a lot of time in Memphis especially during Samantha’s critical surgeries and procedures but no matter how much time they spent in and around the hospital Jerod, Nathan and Samantha never ran short of imagination,  With encouragement from Libby, the three cousins would come up with creative ideas and games to entertain themselves and other patients and staff every time they were together but the one constant was something they called “The Rainbow Restaurant”.  The imaginary restaurant developed a life of its own within the walls of St. Jude Hospital, complete with signs, menus, a seating area and even a TO-GO section for some of the doctors who rarely had time for the full seven course menu.  The Rainbow Restaurant open and closed in a new location every time the three of them got together, whether it was in Samantha’s room or a vacant room that the staff allowed them to use, everyone would stop by and place their order for either a full meal complete with a maitre de or just a cup of coffee.

St. Jude Hospital serves children from many diverse backgrounds and although, as odd as it seems to most of us, sometimes the patient’s family would have to leave their young child in the care of the hospital staff and go back home. Once while we were visiting Samantha in the hospital there a was a crying baby in the room next door and so Libby and I took turns sitting with the little girl who’s parents had to return to their home in Israel so they could work and take care of the other children. Although the nurses checked on little girl constantly, we spent a lot of time feeding and taking care of the little girl while we were there. I remember the look on five-year-old Jerod’s face when he came into the room and asked me why I was holding someone else’s baby.  (This was obviously long before HIPPA regulations and security issues).  I explained to Jerod that she was sick like Samantha and that she had cancer but her parents had to go home so I had decided to sit with her and see if I could help calm her down.

I think the incident with the baby next door to Samantha’s room affected both of our boys because as we were driving back home, out of the blue, Jerod said, “When I grow up I want to be a doctor”.  I asked Jerod, “What made you decide that you wanted to be a doctor?” and he said, “If I become a doctor then I can figure out how to stop cancer and I will be able to make those kids at St. Jude ‘all better’ and then they wouldn’t have to be in that hospital all alone without their mommy and daddy”.

Jerod was sitting in the back seat being very quiet (which always made me nervous) and I could tell he was thinking about our conversation so I watched him in my rear view mirror for several more miles as we rolled down interstate 40 toward Nashville.  Nathan who was nearly two years younger than Jerod was in that stage where he wanted to be just like his older bother and would always echo, “Yeah, me too” regardless of what Jerod had said.  Later, after considerable thought, Jerod had worked up a big smile on his face as he looked up at me in the mirror and said, “I’ve got it figured out daddy; there are a lot kids from Chattanooga, you know, besides Sam, who have to go to St. Jude because they have cancer, right?”  I said, “Yes, Jerod, there are a lot kids who make that trip”, still unsure as to where this conversation was going.  “OK” Jerod said, “I can do both,” patiently trying to explain his idea to me, “since doctors make lots of money I can buy a brand new dump truck and then I can pick up all of the kids around Chattanooga and carry them to St. Jude Hospital in my dump truck on my way to work.  After all,” he explained, “there is plenty of room in the back.   Then when we get to the hospital I will back my truck up the front door, dump all of the kids out, and then go in side and fix them”.