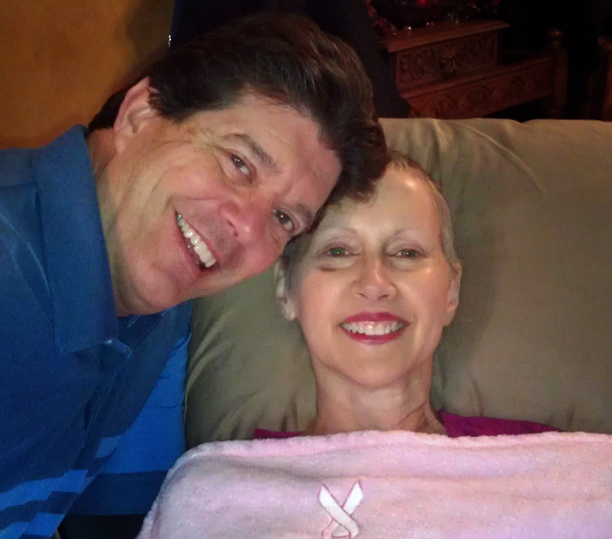 Several years before Libby was diagnosed with breast cancer we remodeled our house and replaced the carpet in the living room with hardwood flooring, the only problem was that a squeak developed in one section of the living room.  The culprit was a loose piece of sub floor that now happened to be right beside Libby’s bed; the exact spot where I put my right foot nearly every time I leaned over to kiss her.

Regardless of how deeply Libby slept or how much pain medication was given, the Pavlovian response to the creaking board was always the same; Libby would turn her head toward me for a kiss and the scene would be repeated dozens of times every night.

In some ways my attempt to sleep during the three months of Libby’s Hospice care was like that of a mom with a newborn unable to get into REM sleep. Similarly, in order to be close to Libby, I either slept in my recliner next her hospital bed or about twenty feet away in my (or rather OUR) bed, making constant trips each time she called or needed a drink. As exhausting as it was to get up dozens of times during the night to check on Libby, it was far worse when I did sleep soundly becasue then I woke up in a panic realizing that I had gone an hour or more without checking.

On the same night following my failed attempt to snuggle with Libby and the subsequent Taco incident with the hospital bed, she was fully alert and wide awake.  Libby took my hand and said, “Thank you for taking care of me, I love you”.  Embarrassed by the attention, I looked down at our hands and asked, “Do you remember the first time we held hands?”  Libby didn’t have to answer and I could tell from the confused look that either she truly didn’t remember that particular “first” in our relationship or the cancer had stolen that memory as well.

“We were on our way home from a date,” I began, a little too proudly, “We were crossing the bridge over Chattanooga Creek on South Broad Street in my ’79 Camaro.  I remember the exact spot becasue we could smell the leather from the Scholze’s Tannery where new saddles sat on the window sills.” On a roll now, I continued my narrative, ” I used one of my irresistible lines which went something like, ‘Libby, you have such small hands, put yours next to mine and lets compare’. Then I closed my grip and I held on until we pulled into the Flintstone Baptist Church parking lot next to your house.”

I was so proud that I had remembered such a detailed account from our dating years and even though it was now dark in the house, I was sure that Libby rolled her eyes when I described my move to hold her hand.

When finished I waited for Libby’s response but then I realized that she had fallen asleep somewhere during my monologue (probably about the time I made my “move”).  Trying not to wake her, I reached over Libby’s hospital bed to tuck her in but my right foot landed on the creaking board. Unconsciously Libby pursed her lips and strained in the direction of the squeak to get her kiss and our nightly ritual began again.